On June 8, 2010, a small Call2Recycle team stood in Vancouver’s Stanley Park to inaugurate a milestone in battery recycling history: launch of the first government-mandated consumer battery collection and recycling program in North America on July 1. In 2009, The British Columbia (BC) Ministry of the Environment (MOE) had selected Call2Recycle Canada to be official product stewardship organization to operate the program.

Seven years later, Call2Recycle Canada is celebrating its anniversary in this official role. But our presence in BC dates back 20 years, when Call2Recycle first began collecting rechargeable batteries. 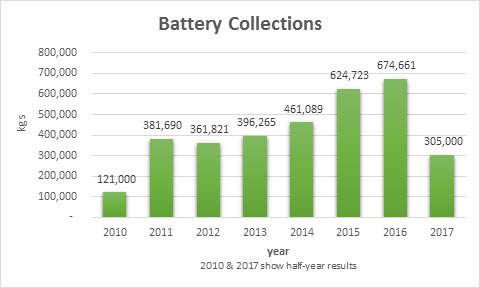 Between 1997 and 2010 Call2Recycle collected more than 100,000 kgs (220,460 lbs.) of batteries, increasing the volume an average of 24% per year. Nearly 1,200 retailers, municipalities, business and public agencies served as enthusiastic collection sites throughout.

Since that sunny day in Vancouver seven years ago, BC has risen to the forefront of battery recycling. Since 2010, Call2Recycle BC has diverted more than 3 million kgs of batteries from the waste stream, including 2.3 million kg of primary and 827,000 kg of rechargeable. Approximately 96% of BC residents live within 15 km of a public Call2Recycle Canada drop off site.

“Call2Recycle is proud of its long history in supporting BC’s strong commitment to recycling,” said Kristen Romilly, director, Western Canada, Call2Recycle Canada. “The steady increase in battery collections during the past seven years is not an accident. It’s proof of how much we as a province value protecting our environment.”

During the past seven years, Call2Recycle BC program has devoted a significant amount of resources to raising awareness about battery recycling, including supporting the Recycling Council of BC’s Zero Waste and Coast Waste Management Association conferences. Romilly is also proud of Call2Recycle’s partnerships with Science World’s Green Games and Earth Day Canada’s EcoKids program to educate schoolchildren on the importance of diverting used batteries from the landfill.

“Getting kids excited about battery recycling often results in changed behaviors that last into adulthood,” said Romilly. “Recycling also becomes a shared activity that the whole family gets involved in. We are investing in the future of BC.”

BC’s regional districts have made major contributions to the program’s seven-year success.

For example, in 2015, Regional Districts such as Columbia Shuswap, Fraser Valley, Fraser St. George, Kootenay Boundary and Sunshine Coast more than doubled their battery collections Fraser Valley and Kootenay Boundary had the highest per capita deposits, with 422 kg and 442 kg collected per 1,000 residents respectively. BC resident not only understand that every battery diverted from the landfill makes a difference, they act on that belief through recycling.

What does the future hold for battery recycling in BC? “The recycling landscape is always evolving, but we are guided by our original goal: being a valuable partner to the province in diverting batteries from landfills and repurposing them through recycling,” said Romilly. “We are excited by the opportunities offered by the next seven years.”