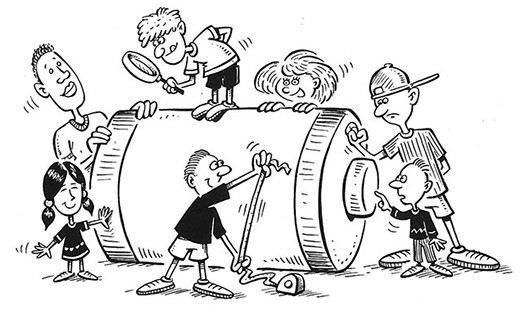 Educating the next generation about battery recycling—whether they are 2 or 20 years old–is one of Call2Recycle’s most fun and rewarding activities, especially in Canada.  We partner with environmental groups to encourage students to learn about the batteries they use every day and how by recycling they can have a real impact on the world for future generations.

This spring we joined with Earth Rangers and Earth Day Canada to offer some fun activities for school-age students across Canada. These programs included:

Students in 50 Greater Toronto Area schools were taught about the environmental impact of batteries in landfills and then challenged to collect and recycle their used batteries. The students responded enthusiastically and, over the course of 12 weeks, collected and recycled 5,111 kg (11,268 lbs) of batteries. Stacked end to end, the batteries would equal the height of 20 CN Towers! Students of the St. John Bosco School in Brampton collected an incredible 731 kg (1,612 lbs) of used batteries and celebrated their win with an Earth Rangers Animal Meet & Greet and pizza party on April 24. The program is being expanded to other parts of Canada in 2015. EcoKids and Call2Recycle Canada partnered on two contests this spring to inspire students to recycle.  The Battery Busters campaign invited Canadian students to learn more about the environmental impact of used batteries by conducting a Battery Busters Audit in their homes in which they learned to investigate and safely recycle used batteries. Winners included Riverview Alternative School in Ottawa for the Home Audit and St. Joseph Separate School in Gananoque. All participants who submitted a report were entered in a randow drawing for a chance to win an EcoKids prize pack and a pizza lunch. The projects are featured at Science World’s TELUS World of Science during Green Month (April 22-May 22).

These programs are valuable because they give students the knowledge and tools they need to take action and recycle–a first step in changing the behavior of future generations. Battery heroes were the focus of the EcoKids Battery Hero Art Contest.  Students in grades 2-8 were asked to submit a drawing of their idea of a superhero who prevents batteries from filling up our landfills and then describe the heroic work that they do. The contest ran from Jan. 12-Feb. 27 and was heavily promoted on Earth Day Canada’s web site and through social media. More than 750 designs were submitted. Sixth grader Demetrios A. was selected as the Battery Hero Contest winner! His winning design was revealed on the fourth episode of the Paddy the Beaver cartoon on @Kidoons in late April. For the past few years, Call2Recycle Canada has sponsored the BC Green Games, Science World’s annual contest that rewards environmental success stories from students across British Columbia. Science World calls it a ‘project-style, inquiry-based program is a 21st century learning opportunity in scientific exploration, storytelling, media arts and advocacy.’ Teams of students across BC documented and shared their green stories to win prizes such as cameras, workshops, field trip travel subsidies and up to $2,500 in cash prizes per school.