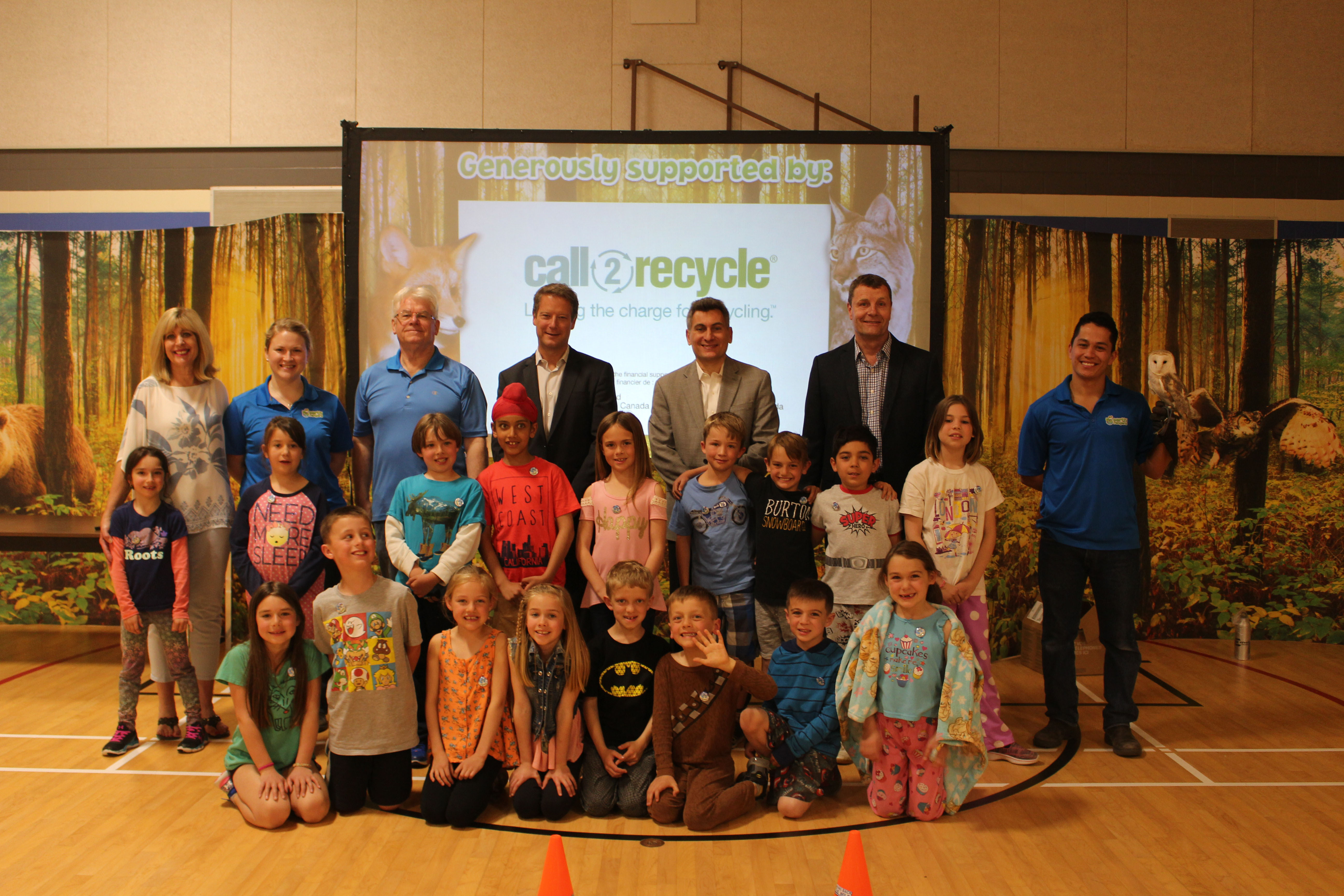 WINNIPEG, May 18, 2017 /CNW/ – Recycling batteries is an important part of reducing landfill waste. It is estimated that every year more than 650,000kg batteries are sold in Manitoba and if these were all thrown in the trash, it would represent tonnes of steel, plastic, and heavy metals ending up in landfills.

In 2011, Call2Recycle was appointed by the Manitoba Government as the agent for battery stewardship in the province. Since then, Call2Recycle has implemented more than 700 battery collection locations across the province, collecting more than 325,000kg of batteries to be diverted from the waste stream.

In addition to these collections, Call2Recycle is also partnering with Earth Rangers for the third year running to bring battery recycling education to students in Manitoba and across the country through their sponsorship of the Earth Rangers School Assembly Program.

Presented in over 800 schools across Canada each year, the Earth Rangers School Assembly features energetic presenters, dynamic live animals, and interactive content that engages students and teachers in learning about Canadian conservation and environmental protection.

Call2Recycle is sponsoring the School Assembly Program in 50 schools across Canada, including 20 in Manitoba. Included in these assemblies is information about the importance of keeping batteries out of landfills by properly recycling them. Students are then challenged to collect and recycle as many used batteries as possible over a two week period with the chance to win a pizza party.

“In Manitoba alone over 5,000 students worked together to collect and recycle over 1,500kg of batteries”, says Peter Kendall, Executive Director of Earth Rangers. “These results demonstrate the enormous environmental impact our members can make through their own individual actions”

Call2Recycle is thrilled with how receptive Manitobans have been to battery recycling since their program officially launched in 2011.

“In 2016 alone almost 100,000kg of batteries were collected across the province and thanks to steady growth over the last five years, over 91% of Manitobans now have access to a Call2Recycle collection location within 15km of their home,” says Joe Zenobio, President of Call2Recycle. “While we are seeing growth across the country, our partnership with Earth Rangers has enabled us to reach Canada’s next generation of environmental stewards in record numbers.“

Earth Rangers’ and their live Animal Ambassadors will be in Winnipeg delivering our School Assembly Program at Emerson Elementary School on Friday May 19th at 1:15pm. Following the presentation,  Earth Rangers and Call2Recycle representatives will be available for interviews and a photo opportunity with select students. The Honourable Cathy Cox, Minister of Sustainable Development, will also be in attendance.

Please contact Amy Cross at [email protected] or 905-417-3447 x2229 to confirm covering this event in your community or for photos from the event if you are a not able to attend in person.

Earth Rangers is The Kid’s Conservation Organization, dedicated to educating children and their families about biodiversity, inspiring them to adopt sustainable behaviors and empowering them to become directly involved in protecting animals and their habitats. To become an official Earth Rangers Member, go to www.earthrangers.com and for more information visit www.earthrangers.org

Call2Recycle Canada, Inc. is a non-profit organization created and funded by battery stewards committed to responsible recycling. The stewardship program has been operating in Canada since 1997 collecting and recycling primary and rechargeable batteries nationally.